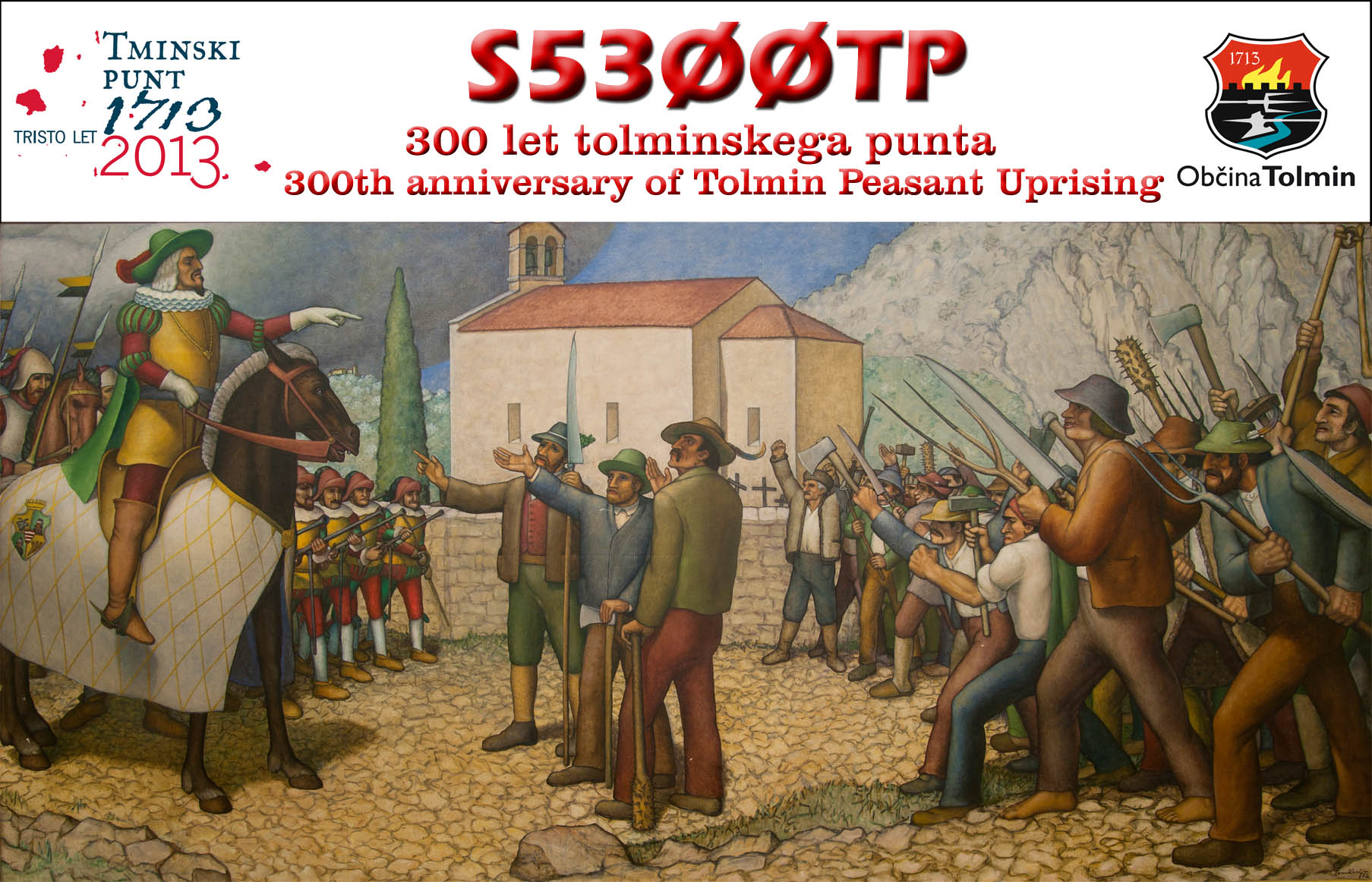 Front view of QSL card.
The painting is showing an encounter between Tolmin count Coronini and the rebels from Tolmin in Solkan.
The paining was made in 1917 by Tone Kralj.

You can also view back side of QSL card.
QSL Via: Birou, Direkt.

The great Tolmin Peasant Uprising began in 1713. Farmers in Gorizia and part of Carniola resisted the new government taxes (tax on meat and wine). Farmers in Tolmin region have for a long time been in a dispute with the Head of Tolmin, Count Coronini; Jakob Bandel collected taxes self-willedly and with use of violence. In March 1713 the latter shut down a group of Tolmin people and thus facilitated the creation of Association of Farmers and farmers’ march from the domination of Tolmin and Kanal. On 28 March 1713 about 6000 farmers went to Gorizia, destroyed the tax collector’s house, saved all the farmers from jail and reached an agreement on the withdrawal of new taxes. This success of Tolmin people sparked revolts in the wider district of Carniola: in Čepovan, in Brda, Brkini people also started to resist, Idrija miners, people of Žiri and farmers under Rihemberg, Štanjel and Sveti Križ domination.

Aristocracy feared for their own safety and property, so they started sending requests to the court to help them in their defence. In June came krajšniki (residents of Krajina), who shortly hunted down and arrested more than a hundred rebels and their leaders. Fines were imposed: monetary fines, people of Tolmin were deprived of the right to elect mayors, 72 rebels were imposed prison sentences and confiscated property, 11 rebels were sentenced to death – they were killed in Victory Square in Gorizia on 20, 21, and 23 April in 1714. This was the last major uprising in the region; however, a rebellious spirit still remains.

Coat of arms of the Municipality of Tolmin:

Municipality of Tolmin gained the coat of arms in 1973. It was founded by Academy-trained painter JanezTrpin.

Coat of arms of the Municipality of Tolmin is understandable at first sight, depicting important historical event in Tolmin region – the great Tolmin Peasant Uprising in 1713. It expresses the continuity of the fight of Tolmin man against violence, the struggle for freedom and a better life.

Presentation of Tolmin region and its natural beauties.

(s53zztp DON’T EXIST, you didn’t get our call correctly).